Io is the most volcanically active body of the solar system. Furthermore, it is embedded in Jupiter’s magnetic field, the largest and most powerful planetary magnetosphere of the solar system. Due to its strong volcanic activity, Io expels ions and neutrals, which are in turn ionized by ultraviolet and electron impact ionization, forming a plasma torus around Jupiter [1,2]. As Io moves inside the plasma torus, elastic collisions of ions and neutrals inside its atmosphere generate a magnetospheric disturbance that propagates away from Io along the background magnetic field lines at the Alfvén wave speed. This phenomenon creates a pair of Alfvén current tubes that are commonly called Alfvén wings, which have been observed by several flybys [1].

The figure shows the momentum (non-dimensional) and magnetic field of the plasma that surrounds Io, obtained with the magneto-hydrodynamic (MHD) plasma model of FLUXO*. The Alfvén wings can be observed as disturbances of both the background magnetic and momentum fields. In yellow is the trajectory of the I31 flyby of the Galileo spacecraft, which visited Io in 2001 [1]. The Galileo spacecraft is also depicted (not to scale). A 3D model of the moon’s surface developed by NASA [3] was superposed on the simulation results. 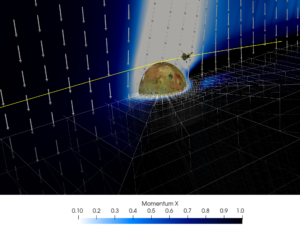